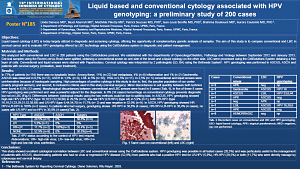 Liquid based and conventional cytology associated with HPV genotyping: a preliminary study of 200 cases